What is a congenital neck mass?

A congenital neck mass is a growth that is present at birth and slowly becomes noticeable to the patient or family. Although the neck abnormality is present since birth, the resulting lump may not appear until much later in life.

What are the types of congenital neck masses?

Congenital neck masses can take many forms. The most common congenital masses that are treated by an ear, nose, and throat specialist are:

Each of these causes will be discussed in detail below as well as Deep Neck Infections.

What are Branchial Cleft Anomalies?

Branchial cleft fistulas (tracts) and cysts (called anomalies) are found in the neck and are composed of tissue trapped in the developing neck. These anomalies appear as a soft lump or draining opening on one side of the neck. They can appear in any age group yet are very common in the first decade of life. Because these anomalies develop in the growing embryo, any tract that forms in combination with a cyst follows a fairly predictable pattern. The tracts connect the cyst to the inside of the throat at a specific area. It is important to understand this relationship so that the entire tract can be excised and will not recur.
There are three kinds of branchial cleft anomalies. A first branchial cleft anomaly is more unusual and may be involved with the nerve that moves the facial muscles (Facial nerve).

If your child has been diagnosed with a branchial cleft anomaly, many times the physician will order a CT scan (cat scan). This test will allow us to identify the exact location of the mass and/or tract as well as its relation to blood vessels and nerves in the neck.
Once an anomaly has been identified, treatment consists of surgically removing the cyst before it has a chance to get infected and become an abscess. Surgery is performed under general anesthesia by making an incision over the cyst or draining area. Every effort is made to place the incision in an existing skin crease so that cosmetically the child’s scar will be minimal. Plastic surgery techniques are always used to close the incision. Branchial cleft anomalies are usually removed as an outpatient procedure. These operations usually last between one and two hours. Ear, nose and throat specialists have extensive training in surgery of the neck, making them the most qualified physicians for this type of surgery.
If the cyst has become infected (or formed an abscess) prior to removal, incision and drainage of the abscess may be necessary first, followed by treatment with antibiotics. The cyst and tract can then be safely removed at a later date.

What are Thyroglossal Duct Cyst?

Thyroglossal duct cysts are cysts that are left over when the thyroid migrates from the base of the tongue into the neck before birth. The cyst is connected to the back of the tongue by a small tract. The cyst usually lies in the middle of the neck in front of the “Adam’s Apple”. 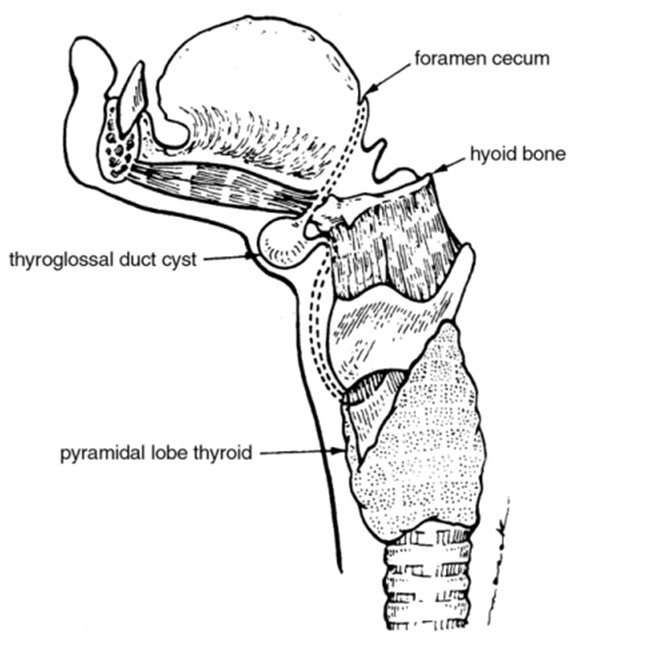 Thyroglossal duct cysts usually show up in the first ten years of life, but may be found in older children or even adults. It is a benign cyst that usually contains mucous or even pus-like fluid. Many times, these cysts will not be evident until your child has an upper respiratory infection (cold). After which, the cyst will suddenly appear in the front of the neck. The sudden appearance or rapid enlargement of these cysts can be alarming. If a cyst is infected, many times antibiotics and/or drainage may be necessary to control the infection prior to definitive removal.

However, if the cyst appears without infection, and you wish to avoid further problems with infection, surgical removal is best performed before the cyst is ever infected.

Thyroglossal duct cysts are usually in the middle of the neck and seem to move up and down during swallowing. Because thyroid tissue may be inside the cyst, it is important to make sure that the thyroid gland has developed normally (and that not all the thyroid tissue is within the cyst). Your doctor may order an ultrasound and/or a thyroid scan to make sure the “cyst” is not the only functioning thyroid gland.

Once these tests have been completed, excision of the cyst may be performed as an outpatient procedure. This operation usually takes 45 minutes to an hour. Your child may leave the same day but will require decreased activity in the first week after surgery.